To kill his girlfriend Sidney and her parents because her mother was in an affair with his father (partially succeeded; he did kill the mother but the latter remained alive and well)
To turn his own life into a horror story of his own and end it with everyone in town being killed (failed)
To become the greatest crime lord in Woodsboro (succeeded)

Fearsome Terrorist
William Bill "Billy" Loomis is the main antagonist of the 1996 classic horror film Scream and the posthomous ultimate antagonist of the fifth film of the series Scream 2022. He is a psychotic and monstrous criminal and fanatic who likes horror movies and attempts to terrorize people in order to make his real life into a horror movie, since his breakdown after his parents have divorced. He is portrayed by Skeet Ulrich.

Once he was a regular, ordinary and mentally stable person who loved horror movies but only saw them as a hobby. However, one day his parents got divorced and to make matters worse, Roman Bridger shows Billy a footage of his father getting married to Maureen Prescott (the mother of his girlfriend). He then starts mentally collapsing and starts watching more violence within the horror movies he likes, and he becomes an ultimately psychotic monster. Billy Loomis then murders Maureen out of jealousy and lust.

Within the following year, Billy becomes a serial killer known as The Ghostface and he kills both Casey Becker and Steven Ortin. However, The Ghostface manages to escape the cops before they arrive. Billy manages to build an alliance with one of his mates, Stu Macher. The two criminals decide to arrive with their Ghostface masks outside Sidney Prescott's house and murder her in order to become infamous and fearsome crime lords. Billy and Stu manage to break in and chase Sidney. However, the police eventually arrive and arrest both Billy and Stu. Billy is sent to the Woodsboro Police Precinct. At the same police station, the cops ask Billy why he had a cellphone with him, as they suspected that he called Sidney to harass her. However, he denied what he truly did and he answered that everyone has a cellphone with them. To make matters worse, his father Hank Loomis defends him and asks him to quickly check his phone so the police won't discover his masterplan. The Sheriff of the police Burke told Hank that he will have to hold Billy until he is proven either guilty or innocent and that they will investigate him for the next couple of days. Eventually, Burke sees a footage of the Ghostface costume and the attacks of the fearsome fanatic. He realizes that Billy was behind the attacks, and decides to put him into jail. After Billy was released, the classmates, with the exception of his mate and accomplice Stu, were very cautious of Billy and they always kept a distance of him. During the break, he walks into Sidney and asks her if she thinks that he murdered her mother. She at first denies it, but then she scolds at him and tells him that things aren't like they used to be between them. She walks away as she gets very upset. However, as Sidney goes to the toilet room, Billy manages to sneak in and attack her as Ghostface. Billy later watches as Tatum Riley speaks with Sidney about Billy and convinces her that he is not worth her time. An enraged Billy goes and confronts Sidney and her friends at their party. He first finds Tatum, and kills her as part of his evil scheme. Sidney then calls Tatum, but does not here a sound from her calling back. She then asks Stu where Tatum is, but he does not know. Billy then finds Sidney and asks her to talk to him alone. He apologizes for his acts of mischief which made her think that he is behind the murder. She finds him sympathetic and emotionally unstable but still believes that he didn't commit or organize the scheme, and she decides to forgive him. Sidney and Billy then continue talking and start flirting with each other, even becoming the same lovebirds that they have used to be. After Billy has sex with Sidney, he goes and tells Stu about his next part of the scheme. Eventually, his plans work for the first few moments of action, and Ghostface (secretly Stu in his clothing and mask) pretends to stab and injure Billy. While the others flee, Sidney tries to help Billy escape from Stu. Billy (while still being injured) hides in a locked room with Sidney. However, as soon as Randy runs towards the room in order to hide there from Stu's attacks, Billy opens the door and kills Randy. He then reveals that he is the Ghostface and that Stu is accompanying and assisting him as a decoy Ghostface. He also reveals to Sidney that he was behind the murders and the phone calls, and not Stu. It was all part of his masterplan to kill her mother and frame her father for the incident, so he could turn his own life into another horror movie. Gale tries to shoot Billy, but instead, Billy backstabs her and kills her. Billy then goes to hunt Sidney down, but to his surprise, Sidney hides behind the door and stabs him in his chest, thus killing the murderous fanatic for good.

Billy is a narcissistic, sociopathic, monstrous and psychotic teenager who often pretends to love Sidney and calls her Sid as part of their romance just as a cover for his true intentions; to mercilessly kill her and her parents, and become the most horrific crime lord in town. He is a manipulative and heartless monster who wants to inflict his emotional crisis onto other people and let his anger and rage all out with no remorse at all. He enjoys killing others and has no emotions or empathy at all. He even said that living in a horror film is fantastic, and therefore, his ultimate goal is to turn his life into a horror movie so he won't feel any pain after what he did and how he should one day pay a high price. 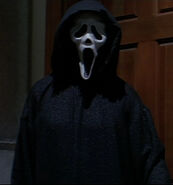 Billy with Stu and Randy

Community content is available under CC-BY-SA unless otherwise noted.
Advertisement